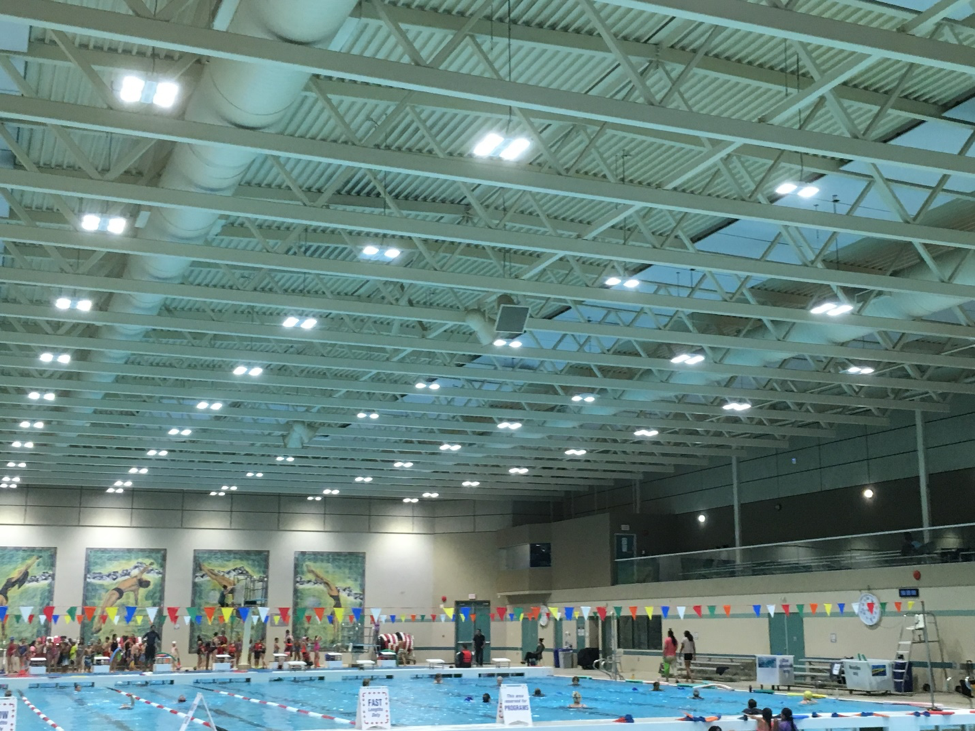 Located in the heart of Surrey, the Surrey Leisure Centre features a variety of fitness amenities to the community, including a large lap and leisure pool, a spin room, an aerobics room, a workout / weight area, in addition to a couple of small meeting rooms.

In June of 2017, Sound Solutions received an invitation to provide a design/build on upgrading the sound system for the Surrey Leisure Centre.  Several components were approaching 20 years old, and the main speakers in the natatorium had lost functionality for the past few years. The current pool sound system consisted of a large portable stereo  that an MP3 player was plugged into. Upgrades had been done to certain areas of the facility, however  the centre still  lacked a paging system, background music. The manager had also been advised that all of the pool speakers were blown and required replacing.

Our technicians went in after hours to check the speakers and found that they were all functioning normally. Fortunately, the speakers (Community R series) were designed to be used in  adverse environments, and we were very confident that  the speakers would last for a number of years to come.  As a matter of fact, our conviction was so strong with respect to these speaker’s reliability and performance,  we offered a 1 year warranty on their existing speakers!. The seven weather-resistant speakers came at a significant cost, so reusing the existing speakers reduced the total price of our proposal, and of course benefiting the Surrey Leisure Centre.

After an additional meeting we were awarded the contract, and planned the  install during the pool shutdown between mid-September and mid October of 2017.  The first order of business was to move the speakers from over the pool areas to the walkway that ran between the lap and leisure pools. Mounting speakers directly over water  is never an ideal place to mount speakers, as servicing becomes impossible while the water is in the pool. By moving the speakers over the walkway, the sound coverage was improved and any future servicing or replacement of the speakers could easily be done with an extension ladder if required. 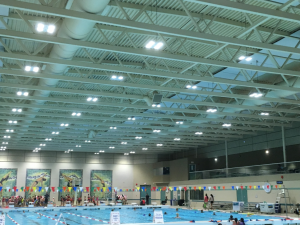 The main sound system consisted of a new QSC Core 110f digital signal processor, replacing the two existing DSPs in the rack. One DSP was powered up, but the controls, and most of the wiring had been removed. It was obvious that the unit had not been used in years. The replacement DSP was too small to handle all of the leisure centre’s zones, and was rapidly losing functionality.  In order to address this situation, we  installed two touch screens to control the DSP unit. The first screen was located at the front desk, and the second screen was installed in the guard room. Separate rotary music selectors as well as a standard rotary volume control was also installed in the workout room, keeping operation simple for the staff.

The touch screens in the guard room and reception area allow staff to page into three different areas, along with an all page button. A custom built box in the guard room houses the touch screen, and has connections for the new wireless headset mic, the desktop paging mic, and a wired plug-in for the MP3 player or other music source. 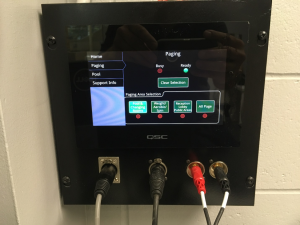 Additional touch screen pages allow music selection for the various areas throughout the building.  Also, a dedicated screen on the pool touch screen allow staff to control the various speaker areas as well as the underwater speakers. The volume levels are set so that the system can never reach equipment damaging levels, protecting the speakers, the amplifiers in addition to the staff and users of the facility.

The main amplifier rack was overhauled, and many 100’s of feet of unused and old wiring was removed from the rack to clean it up. We reused the existing 6’ rack that was previously installed, but due to the new generation of high efficiency amplifiers along with the DSP unit, the used portion of the rack ended up being less than 3’. Blank cover plates were installed to clean up the look of the rack, and to prevent fingers from getting behind the equipment. 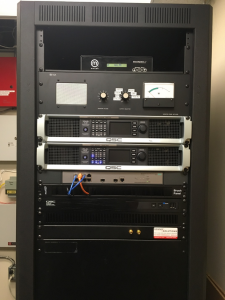 An Evo wireless rechargeable headset was installed in the guard room. The Evo units are water resistant (not waterproof!), and with the receiver in the guard room, the staff can walk anywhere in the natatorium without dead spots.

We used 4 channel QSC amplifiers, (the PLD series) to drive all of the speakers. Music sources were reused for the lobby as well as the workout area, and an additional MP3 player connection was installed in the rack so that other music could be played in all areas for special events. Each zone has the ability to select any of the music sources for the greatest variety possible.

Finally, a TOA monitor speaker was installed in the rack so that each area could be monitored to set levels, and to select the music channel of the satellite music receiver.

Because all sorts of questions can come up during the operation of the sound system, especially by new users of the system, we always put our contact information on each touch screen.