Sound Solutions was the successful bidder in July of 2017 to replace and program two new QSC PLC 4.2 amplifiers at the Sungod arena in Delta, BC. 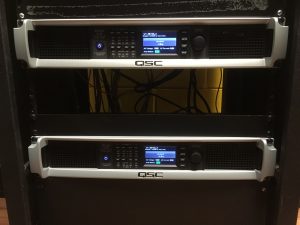 The arena’s sound system was over 20 years old, and one of the two existing Peavey amplifiers was no longer operational.  This issue caused the main circuit breaker to kick out when the amplifier was turned on, and both amplifiers were replaced as a result.

The new QSC amplifiers are completely programmable via laptop, including a parametric equalizer, a compressor/limiter, and data storage, showing how the amplifier is used over a period of time. We set the equalizer and the volume limiter to prevent damage to the existing speakers, as the new amplifiers put out significantly more power than the old ones. We also cleaned up the input cables to the amplifiers, as several low end audio adapters were used to connect the amplifiers to the preamplifier.