As with many sound systems that are 10-30 years old, the Powell River Recreation Centre had several independent audio systems in their pool, arena, rink, fitness centres and lobby areas.  This resulted in having no way to broadcast an all-building page  into all areas, in the case of an emergency or building mass notification.

We had done some work to the various sound systems in 2018 and 2019, with the understanding that significant changes would have to be made in order for a centralized system to be put in.

In 2018 we added a number of paging speakers and wiring, as only six speakers out of approximately 30 were working in the lobby area. This was due to numerous wires and conduit being cut about 7 years ago when the lobby and changeroom areas for the pool were renovated, leaving many areas without sound. After several days of scoping out the building wiring, much of which was inaccessible and unlabeled, we replaced most of the wiring, and added several new speakers to replace the ones affected by the chlorine environment.

In 2019. we added an amplifier and subwoofer, and cleaned up  much of the arena rack wiring to provide a bit more punch to the system during hockey games. We also installed four new full range Community R.5 speakers to replace the old Yorkville speakers suspended by chain, which did not have the reinforcements within the cabinets to be safely hung.

In late 2019, the sound system upgrade was put out for tender, and Sound Solutions was awarded the contract to install a QSC digital signal processing system, with two touch screens and a new rack. Significant wiring runs were added into the building to accommodate the new system, and a significant amount of old wiring was removed to clean up the racks and the areas above the ceiling.

The system consists of several zones:

All areas now have the ability to use their own local mic and music sources, or to feed one of three background music sources located at the front desk into their zone. A front desk paging mic automatically overrides any activities using the local sound system, for a zone or complete building page in case of an emergency.

A touch screen at the front desk controls the master volume levels of each area, with volume limiting as the sound system reached maximum volume. This prevents end users from overdriving the sound system and from damaging the speakers or the amplifiers.

The original custom built pool speakers, with the cone rotted out due to constant exposure to moisture.

We removed the 1970s-era custom built speaker enclosures that had the 8” speaker cones rotted away long ago, and installed six new Community R.35 all weather speakers. Significant sound quality improvement was noted even with only two of the Community speakers installed and turned on.

Check out the new pool speakers!

The entire rack in the pool was gutted and replaced with new equipment, along with a new Evo wireless headset system that covers the pool area. 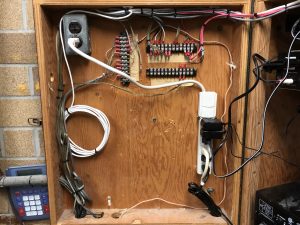 Before and after pictures of the pool sound system rack

The fitness rooms received a new Factor mic and music input plate, each equipped with a Bluetooth receiver, so that staff and end users can pair their phones wirelessly within the room. A control on the Factor plate allows management of the background music in each room. This allows the background music to be  turned off when activities are taking place, without needing to ask the front desk to power the music off.

The reception area has the main sound system rack installed, which was reused from the fitness area, .  This rack houses the Shaw cable background music receivers, and the amplifiers for the pool and various fitness areas. Each amp is labeled as to their function, and save for a new amplifier for the pool, all remaining zones are powered by  the existing amplifiers, as they were in good shape.

The arena rack got a final overhaul, with old speaker switching boxes removed, and consolidating the figure skating equipment into the main rack. This considerably reduced the amount of interconnections, improving reliability and simplifying the operation of both the rink and arena sound systems.

Before and after pictures of the arena rack 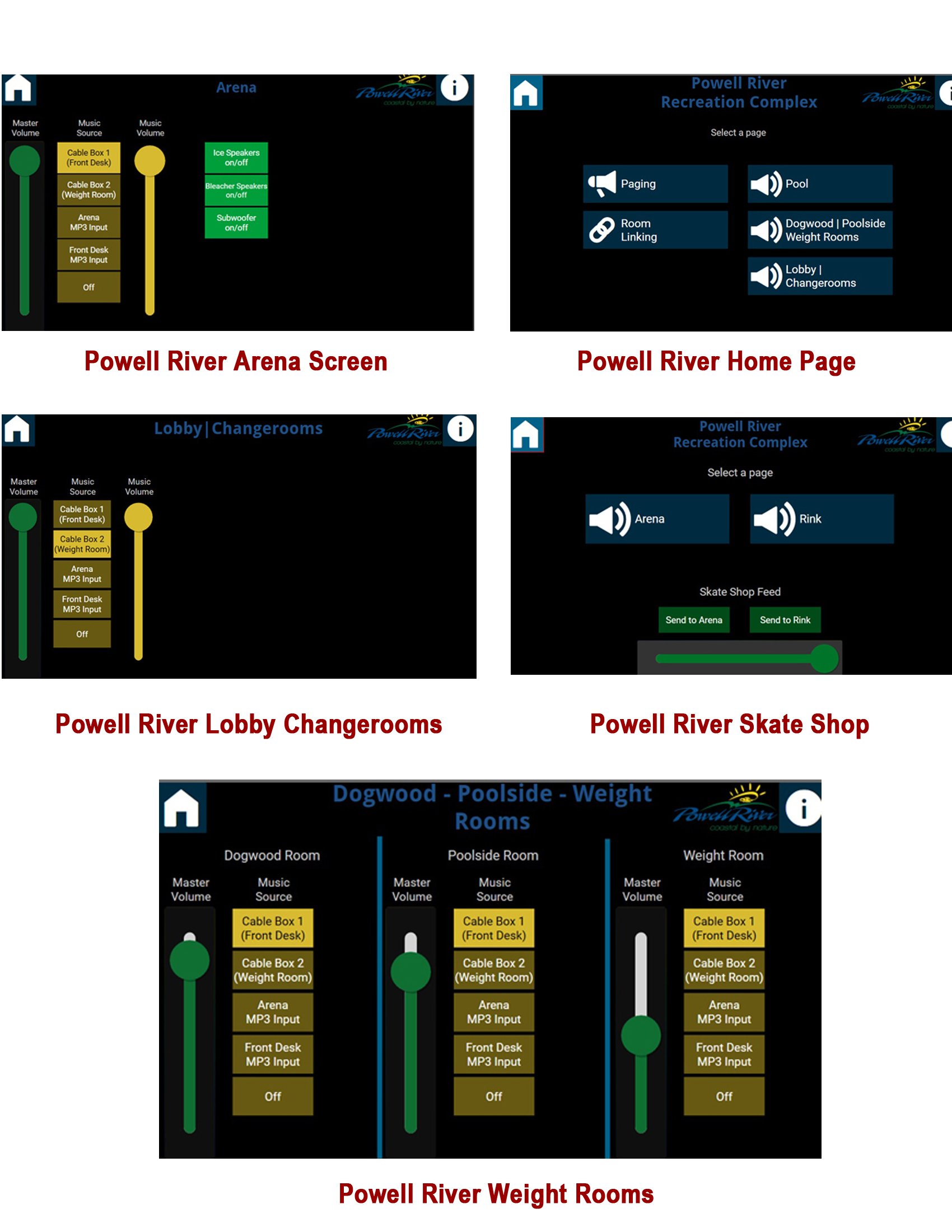 All staff noted a significant improvement in the overall sound quality, and the ease of use for all areas of the building. The full instruction manual for the Powell River sound system can be found here: