Whether you are using a wireless microphone in a sanctuary, an aerobics class, or in a karaoke system in your basement, most of the professional and semi-professional systems are in the 600Mhz range of frequencies – generally from 614-698 Mhz. These wireless microphone systems are called ‘UHF’ systems. Users of these UHF systems generally have excellent quality sound, and lack of dead spots.

More importantly, users of these wireless microphone systems have not had to pay a licensing fee which is typically the case with other types of wireless systems. Fast food restaurants, for example, pay a $600 a year licensing fee to ensure no other wireless systems affect their given frequency set.

With the license-free systems, most are multi-channel frequency systems.   This means that if interference does affect one frequency set, the end user of the microphone can simply change frequencies to an interference-free channel, and continue using the system without issue.

Frequency Change as of 2018

In 2017, we learned that the 600Mhz frequency set was to be auctioned off to cellular phone companies in the US, and that a wholesale frequency change was to happen throughout the US some time in 2019. We at Sound Solutions contacted all of our Canadian distributors in an effort to determine if Canada was to be affected. Unfortunately, at that time, none of the suppliers could offer us an answer, as nothing had been announced for all provinces.

In spring of 2018, we confirmed that Canada would be affected by this frequency change, and that the 600Mhz set of frequencies was also going to be auctioned off to cellular companies needing more bandwidth.

In North America, the new frequency set was to be in the 500Mhz frequency range, which would continue to offer similar range and fidelity with no dead spots. The problem however,  is that it is not economically feasible to do change frequency in an existing wireless mic.  While some companies offered a trade-in for the older 600 Mhz systems, it appears that most clients will continue using the 600Mhz systems until they reach end of life. 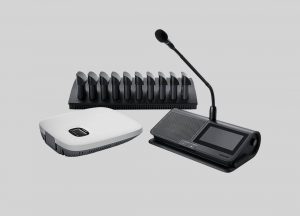 When is the frequency change taking place?

As of November of 2018, suppliers and dealers were no longer selling the 600Mhz wireless microphone systems.  In fact, all parts short of the microphone elements were quickly discontinued by all suppliers, and all new systems sold are in the 500 Mhz range.

How do I know if I have an affected 600Mhz wireless microphone?

All wireless mic systems have an identifying sticker on both the receiver and transmitter units. Many manufacturers will state the range of frequencies on the units, along with the serial number. These stickers are usually on the backs of the units, on the bottom of the receivers, or within the battery compartment of the transmitter.

On the receiver, look for a sticker on the back or the front.

On a handheld transmitter, look for a sticker inside the battery compartment or a label near the display.

On a bodypack, look for a label on the front or for a sticker on the back near the belt clip. 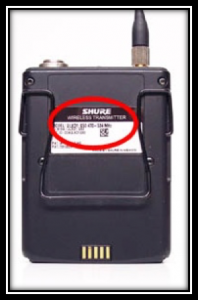 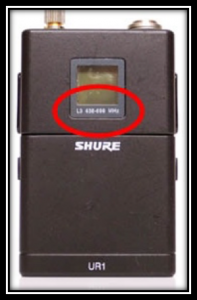 Other manufacturers will use   some identifying mark on the receiver/transmitter units, without actually stating the frequency. If that’s the case,  do not hesitate to give us a call, and we’ll help you identify the frequency.

How long can I use my older 600Mhz system?

The time at which interference will hit the older 600Mhz series of wireless microphones will depend on how quickly the new cellular towers will be built in your area. While the 600Mhz towers will not be in use until late 2020  or early 2021, testing of these towers may occur prior to that time. Our understanding is that as of this writing (Sept 2019), Calgary is already experiencing some interference as new towers are being constructed. When our clients in the BC area will be affected is anyone’s guess, but technically, it will be ‘illegal’ to use  at some point in either 2020 or 2021. The information available online varies from site to site.

Will the government come knocking on the door of your church or fitness facility?   Will tinted window vans full of men in black  sweep the neighborhood looking for people breaking the law? No, of course not! Keep in mind that your very low power battery operated wireless mic has a range of about 100m, whereas the much larger cellular towers have a range in the multiple Kms. The chances of your wireless mic affecting your next door neighbor’s cellular phone operation is slim to none, however these large towers will cause issues with your wireless mic system.

What will the cell tower interference sound like in my wireless mic system?

Well, that is most certainly the $1,000,000 question! We’ve asked several suppliers this exact question, and have received varying responses ranging from  “it will cut out intermittently” to “you’ll hear tones through your sound system” among others.

Here is our recommendation:  For the time being, if your 600Mhz wireless mic system is working fine and is interference free, continue to use it. We find that the lifespan of a heavily used fitness headset system is between 3-6 years, and in a less used church handheld microphone system, the lifespan can be 10+ years. Continue using your existing wireless mic system until such time that you experience problems with it. Understand that replacement receivers and transmitters are no longer available for the 600Mhz range, so once a unit stops working or is physically damaged, you’ll need to replace the entire system.

Note that the new 500Mhz wireless mic systems physically will look identical to their 600Mhz counterparts, so you can save the old system for spare parts, including windscreens, battery covers, knobs, etc if you so choose to. Some suppliers, including Sound Solutions, are offering some trade-in value on older 600Mhz systems,  so call us to find out!

For those so inclined, here’s additional links with more technical information regarding the 600Mhz frequency range:

https://www.fcc.gov/wireless/bureau-divisions/mobility-division/wireless-microphones (US gov’t link, almost all information applies to Canada as well save for the time lines, add about a year to every date given in this link)